Prosthetic limbs that can be ‘connected to brain using light’ 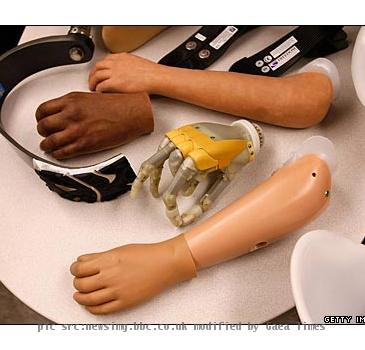 LONDON - Prosthetic metal limbs, which are often rejected by body, may become history as scientists are developing limbs that would be connected to brain with light.

Scientists at the Southern Methodist University in Dallas are developing photonic sensors that could improve connections between nerves and prosthetic limbs, reports New Scientist.

Marc Christensen and colleagues would employ optical fibres and polymers that are less likely than metal to trigger an immune response, and which will not corrode.

The sensors are currently in the prototype stage and too big to put in the body, but smaller versions should work in biological tissue, according to the team.

The sensors are based on spherical shells of a polymer that changes shape in an electric field. The shells are coupled with an optical fibre, which sends a beam of light travelling around inside them.

The way that the light travels around the inside of the sphere is called a ‘whispering gallery mode.’

The idea is that the electric field associated with a nerve impulse could affect the shape of the sphere, which will in turn change the resonance of the light on the inside of the shell; the nerve effectively becomes part of a photonic circuit.

To use working versions of the sensors, nerve connections would need to be mapped. For example, a patient could be asked to try to raise their missing arm, so that a surgeon could connect the relevant nerve to the prosthesis.

The researchers plan to demonstrate a working prototype on a cat or dog within the next two years.

Christensen said one day the sensors and optical fibre could acts as jumper cord to restore movement and sensation to patients with spinal cord damage, by routing nerves in the brain to the legs, circumventing the damaged area. (ANI)