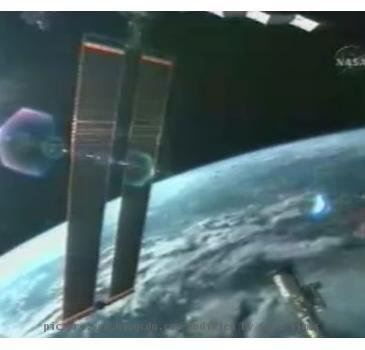 While writing this article I remembered a wonderful sequence to the PG rated genocide thriller Hotel Rwanda. The protagonist of that movie explains in one scene while bribing a local warlord what should be a bribe that would be suitable for the fellow who actually has a lot? Money is not of any value to him but when you give him a exorbitantly expensive Cuban Cigar it makes a statement. Similarly many few people have ever celebrated the 10 year old anniversary of the places they have worked in but when the International Space Station celebrates its 10 year anniversary it has done it in space and in considerable style.

It was 10 years ago when the first batch of human astronauts arrived there to make it their home. It has stayed that way ever since. Well it even went into expansion mode with the new solar array becoming live during the Atlantis mission. the 240 feet long wings was the third of the fourth wings installed on the Space Station. It even got a dedicated (albeit slow) Internet line for the astronauts to tweet with the Pressurized Multipurpose Module (PMM) launches in September 2010. And not to mention the uber cool Robonaut 2 at the astronomer’s beck and call.

The journey was not all smooth sails though as the primary latrine decided to give way in mid 2008. Thus the project has completed 10 of its 20 years of its expected lifecycle. It is quite probable that the station maty continue way past the deadline even with an all robot crew. Douglas H. Wheelock the ISS commander tweeted

The Florida peninsula and the southeastern U.S. on the kind of evening that I miss most about our planet. A clear autumn night with moonlight over the water and the sky filled with a billion stars.

He also gave us this pic for all earthlings to enjoy.