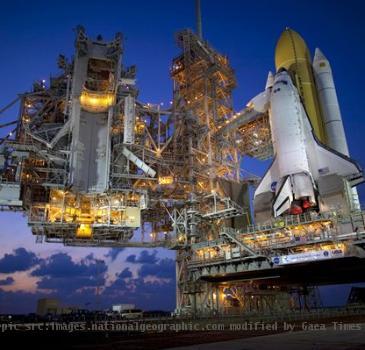 CAPE CANAVERAL (GaeaTimes.com)- NASA’s space shuttle Discovery is now all set to be launched on Thursday afternoon after being delayed on two occasions due to electrical glitches. The decision to launch the space shuttle was taken after a detailed meeting between the mission managers took place on Wednesday after which it was concluded the Discovery is ready to go its 39th and final voyage. The space shuttle would take off from the NASA center in Cape Canaveral in Florida and would head to the International Space Station in order to deliver a pressurized logistics module that would enable the station to have more storage.

Although Discovery’s launch date has been finalized on Thursday, scientists have expressed concern about the kind of weather that would prevail during the time of take off. NASA officials have said that there are only 20 per cent chances that the weather conditions during Thursday’s launch would be favorable as low clouds and rains have been predicted within a distance of 20 miles of the site of the launch. Moreover, officials are likely to meet on early Thursday morning to decide whether the external fuel tank of the space shuttle should be refilled or not prior to the launch.

Space shuttle Discovery was scheduled to launch on Monday but it could not take place after helium and nitrogen leaks in the system which had to be repaired immediately. A second plan to launch the space shuttle on Tuesday was also scrapped after an electrical glitch of the backup system had to be taken care of. Meanwhile, Discovery’s trip to the International Space Station is going to be the fourth and final flight of the year.